After her studies in Architecture and Fine Arts, started her studies in classical and contemporary dance. Received fellowships in the field of Dance from the National Cultural Centre and the Oriente Foundation.

She received the Ribeiro da Fonte Award for Dance by the Ministry of Culture in 2004.

She worked as a dancer in the opera Corvo Branco, by Robert Wilson and in Aicnêtsixe, by João Fiadeiro. As an actress in imaginação morta imaginem, by Projecto Teatral, in the movies Le Bassin de John Wayne and As Bodas de Deus, both by João César Monteiro.

Created and performed the solos Natural Catastrophe (2002)forDanças na Cidade Festival; beauty is nothing but the beginning of terror (2003) and some flowers remained (2004) for Box Nova at Belém Cultural Center; Do we dream every night? (2015) for Temps d’Images Festival/Appleton Square/Calouste Gulbenkian Foundation; and Delirium (2018)for Cumplicidades Festival . Created the duet with a singer song unsung (2006) for Alkantara Festival/Belém Cultural Center.

In 2015 re-interpret as a dancer/choreographer, the pieces Permanence e Four-legged animal, by and for the artist/performer Maria José Arjona for Art Dubai. 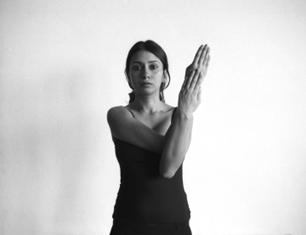