Choreographer and dancer, set and costume designer, researcher and teacher.

His choreographic work has been presented since 1997 in Europe, South America and North America, Middle East, Asia and Africa. In the last 20 years he has investigated and developed a visual dimension of movement and composition, revealing a strong visual component in body-space and choreographic language construction. His shows stand out for the enigmatic, symbolic, poetic and minimalist use of body, dance and space.

His most recent work include the “MIXED FEELINGS” quartet (2016, Culturgest) and the WAVE choreographic research and creation project developed between Japan, France and Portugal, integrating the premiere of the shows “IN THE RANGE OF A WAVE” (Tokyo and Lisbon, 2017) and “A WAVE FROM A DISTANCE” (Tokyo-Yokohama-Lisbon, 2019) and its national and international tour (Portugal, Japan, Egypt, Laos, Cape Vert, Thailand). The WAVE project also includes a series of training activities and creation involving the community, resulting in the premiere of the show “IN THE SILENCE OF THE FIRST WAVE” (São Luiz Municipal Theater, 2019) and “WAVE Lab +55 Paris – Lisbon” (Carpintarias de São Lázaro, 2019).

It has invested in depth, in the relationship of Dance with the Community and in the collaborative dimension of the artistic practice of dialogue and intervention with the world. He has taught since 1998, Contemporary Dance – Improvisation / Composition and Inclusive Dance, developing training projects involving students and dance professionals, people with disabilities, people over 55 and seniors, people with Parkinson’s, children and artists in general. Coordinator and teacher in the project Contemporary Dance for 55plus & Seniors that he has been directing since 2001 in Lisbon integrating weekly classes and presentations and monthly laboratories in Paris. Artistic coordinator of Plural_Inclusive Dance Company and professor of inclusive dance at the ONG Fundação LIGA (since 1998). Certified teacher in the “Dance for Parkinson’s – Portugal / Dançar com Pk” weekly class since 2016 (member of the Dance for PD / Mark Morris Dance Group / Brooklyn Parkinson’s Group, USA). Improvisation / Composition teacher at FOR Dance Theater / Olga Roriz Company (2017-20).

He collaborated as dancer/performer in shows and projects directed by the choreographers – Francisco Camacho / EIRA (PT), Christian Rizzo (FR), Lynda Gaudreau / Lucky Bastards (CN / FR) and the theatre director Luís Castro / Karnart, among others. He collaborated with visual artist Pedro Valdez Cardoso. And with the film director Cristina Ferreira Gomes who co-directed with Luiz Antunes the documentary series “Portugal que Dança” (2017, RTP2, national broadcast television) dedicating one of the episodes to the work of the choreographer Rafael Alvarez. He also collaborated as an interpreter with the mentioned director in the documentary “À Procura de António Botto” (2019, RTP2 – national broadcast television).

PhD in Communication, Culture and Art – Faculty of Human and Social Sciences, UALG. Post-graduate in Communication Sciences – Contemporary Culture – Faculty of Social Sciences and Humanities of the New University of Lisbon. Graduated in Stage and Costume Design and in Theater and Education – Superior School of Theater and Cinema, IPL. He was Fellow grant recipient of the National Center of Culture in the area of ​​Dance / Creation (2000-2002). Integrated Researcher CHAIA – Center for History of Art and Artistic Research at the University of Évora.

He was an artist supported by O Rumo do Fumo (2000-04) and associate artist of EIRA – Contemporary Dance and Performance (2005-2016). Co-founder of ANKA Inclusive Dance Company of São Tomé and Príncipe. Artistic director of BODYBUILDERS – Contemporary Dance, structure of creation and artistic diffusion that he founded in 2016. 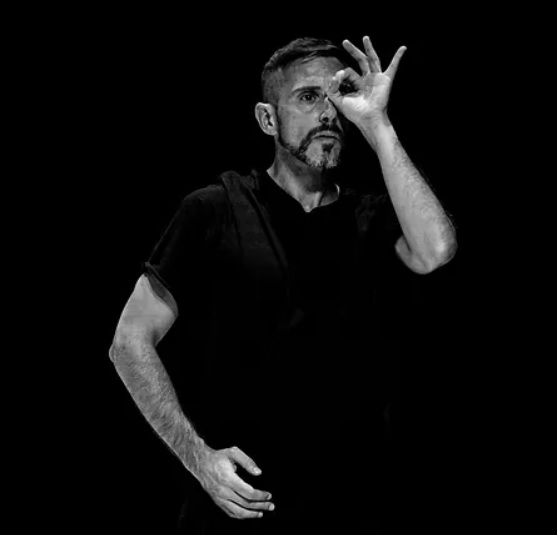