A visit to Portugal’s No. 1 border landmark, in Cevide, Melgaço, can from now on be accompanied by a “soundtrack”. At the site, in the northernmost village of the country, a sign was placed this Saturday with the QR Code, which gives access to a musical piece by Manuel Brásio, with just over six minutes and which can only be heard there.

The song “Au revoir” (Goodbye) is inspired by three letters written by emigrants from that area who went (clandestinely) to France in the 50s of the last century, and talks about nostalgia, waiting, uncertainty, fear and lack of freedom. And it evokes those who leave the earth, want to return and cannot.

“To a certain extent, it is not that far from what we have today. The people continue to have a great need to go out in order to have a better quality of life. I am from Viana and I feel it. I am forced to leave my land to do what I do”, explained the composer, performer and teacher Manuel Brásio, creator of that piece of music, within the scope of the “Sons de Bolso” project, produced by the Intervenção association and supported by JN.

In December, another one entitled “Bachs zeit ist die allerbeste zeit”, by Rui Penha, was launched at the Monastery of Tibães, in Braga. With the same concept, two more works will be created. “History of squares and circles”, by José Tiago Batista, to be presented in February at the Freixo Archaeological Station, in Marco de Canaveses, and “Aqui, que jaz este ar”, by Nuno da Rocha, in March, at the Military Museum from Porto.

“The idea is to bring music to places, almost like statues. They can only be heard on the spot. Basically, it is to bring people and contribute to the growth of [tourist] circuits”, says Manuel Brásio.

The mayor of Melgaço, Manoel Batista, who heard “Au revoir” for the first time today, praised the creation, for the “evocation of those who had to leave and are far away”. “We still have a Melgaço outside the territory, bigger than the one here in terms of population. We are capable of having almost as many people in Paris as we have here”, he recalled, considering the music conceived for the milestone “extraordinary”. number 1 in Portugal.

To listen on the spot, the creators recommend a cell phone with mobile data and headphones. 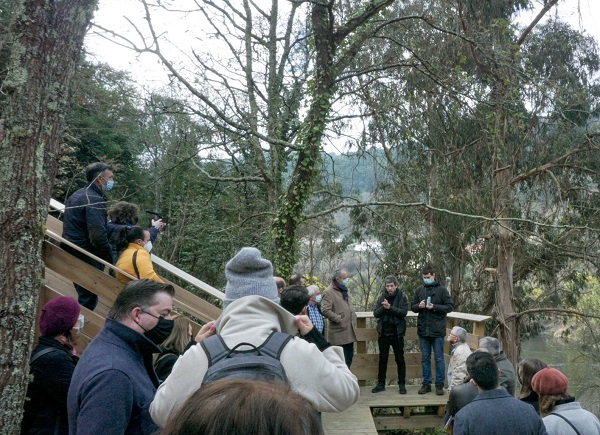