My passion is storytelling. So, I started my professional career as a film and video director. Graduated in Advertising, right at the beginning, I worked in production companies, with institutional and advertising pieces. I have had some experiences in television, as director of educational programs. But I was soon seduced by the possibility of telling short stories, combining fiction, political engagement, memories, and social issues. However, writing was what brought me the most pleasure, much stimulated by the taste for reading, acquired in childhood. Since 2007 I have been researching, writing, and publishing, thanks to the interest of readers and publishers.

Published books:
Here We Are Trilogy: Synopsis – The story is an action thriller, which tells the saga of Aniella, who, since she was a child, was abused and prostituted, by men who considered themselves the owners of her body. With strength and courage, she fights against machismo and the criminal organization that has taken root in the institutions and in society.

Message for Bárbara: Published on Kindle – with the pseudonym Antonio Más. Police novel (Pulp Fiction). Synopsis: Second book in the No Forgiveness collection. It is the continuation of Bárbara does not want forgiveness. Bárbara, now Paola Messina, is the leader of the band Enigma, but threats and executions take her back to the past she had tried to leave behind.

Last Train – Publisher: Vieira&Lent – Kindle – Synopsis: Tells the story of Miguel, in the 1990s, during the Collor government. He lives in the Cine Vera Cruz, where he has lived and projected the tapes for over 50 years. His reality gets mixed up with the films he projects. With the closing of the cinema, Miguel tries to adapt to a new life, without the films and with the obligation of living with people he confuses with characters. Tired, betrayed, he leaves in search of his hometown, with unexpected company. His only objective is to open a new Vera Cruz.
Bárbara does not want forgiveness- Publisher: Bagatelas – Kindle – As Antonio Más – Synopsis: First book in the No Forgiveness collection. Arriving at his police station, Police Chief Vargas finds Bárbara, a beautiful and enigmatic blonde waiting for him, with a great challenge: to unveil and prove two murders, which in truth are part of a revenge plotted over many years. It is necessary for the Chief of police to solve the mystery as quickly as possible, so that he does not become the object of revenge himself.

Short Films:
In the middle of the road – Inspired by the homonymous poem by Carlos Drummond de Andrade.
Low Camera – Shows the difficulty of accessibility in cities.
One day Maria – Allegory about the 1964 military coup in Brazil. Best Actress Award at the Gramado Festival. Best Short Film Award at Festival Jornada de Salvador, Bahia, BR
With Robert Taylor’s walk – Adapted from the homonymous tale by Roberto Drummond. The return of a political exile and the reunion with his past. Augusta José Farinha Best Short Film Award, 11th BRAGACINE Festival – Portugal, in 2013. Awards for Best Director, Best Cinematography, Best Soundtrack, at the RioCine Festival. 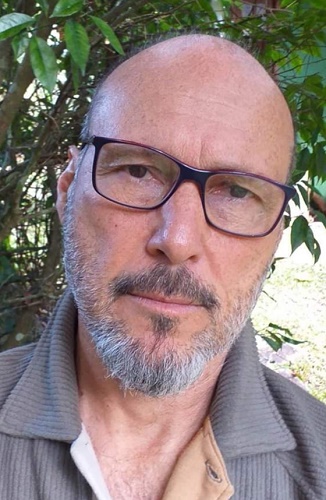